Structure and function of neural networks

The brain is a highly organized complex network with various connections and interactions between neurons. Brain disorders can lead to significant dysfunction of neural networks and consequent functional disabilities. On the other hand, the brain is also capable of reorganizing (through plasticity), which may contribute to (partial) repair and recovery.

Functional MRI (fMRI) is a powerful tool to assess activity in functional brain networks. Functional MRI studies in patients can provide important insights in how brain activation patterns alter and how this relates to functional impairment and recovery. In parallel, fMRI in animal models allow experiments under more controllable and reproducible conditions, which can contribute to elucidating patterns and mechanisms of network remodeling in brain diseases. Several fMRI paradigms are available to assess neural activity and functional connectivity during task execution, (non-invasive) brain stimulation, pharmacological stimulation, or resting state conditions. In addition, functional neuroimaging in small rodents can be conducted with novel optical imaging methods, based on in vivo detection of intrinsic optical signals or fluorescent markers, which can be used to measure hemodynamic and/or electrophysiological activity in cortical tissue. 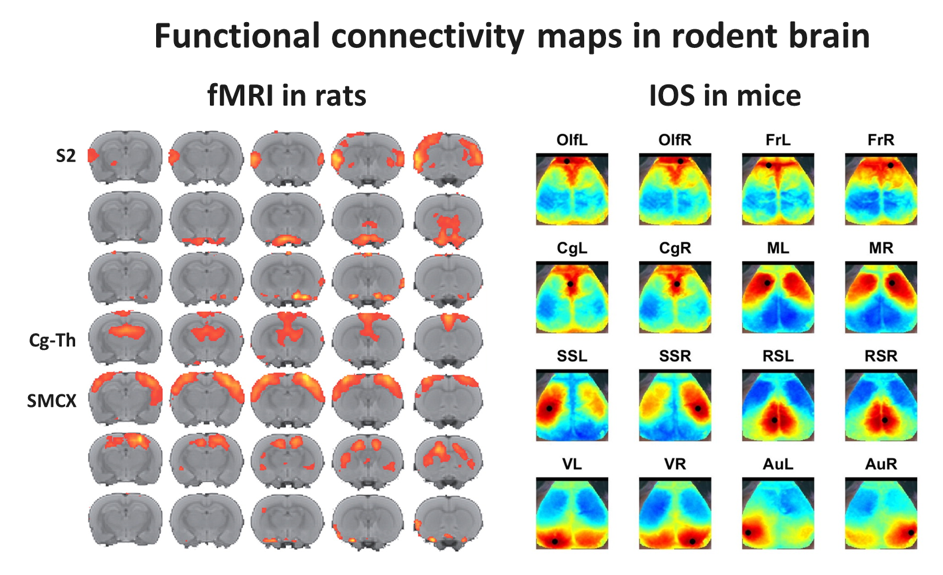 Alterations in the organization of functional brain networks are dependent on the configuration, stability, and flexibility (plasticity) of underlying macro- and microstructural architecture. This may be assessed with structural MRI methods such as manganese-enhanced MRI, a method for in vivo neuroanatomical tract tracing, and diffusion tensor imaging (DTI). DTI informs on the three-dimensional displacement of tissue water, which can be exploited to assess tissue integrity. The DTI-derived diffusion anisotropy and principal diffusion direction can be used to model and map (tractography) the architecture of neuronal fibers. An alternative method, diffusion kurtosis imaging, allows quantification of the degree to which tissue water diffusion is non-Gaussian, which enables further characterization of the complexity of tissue microstructure.

With state-of-the-art tools and strategies for analysis of neural networks, based on structural and functional imaging data from human patients and animal models, we aim to elucidate the complex process of brain (re)organization in cerebrovascular diseases, traumatic brain injury, epilepsy and neurodevelopmental disorders. This is done in close collaboration with colleagues from the departments Neurology and Translational Neuroscience at the University Medical Center Utrecht. By combining MRI with behavioral testing, electrophysiological measurements, in vivo optical microscopy, and histology, we try to elucidate the unknown, but hypothetically fundamental, relationships between (changes in) motor/sensory/cognitive function, large-scale neural network (re)organization and micro-scale neuroanatomical connectivity.